The Tyranny of the Task!

Have you had a bad customer experience recently? Unfortunately the answer is most likely yes. And more than likely your frustration has been caused by someone’s rigid adherence to rules, even when the rules don’t appear to make sense. All too often the person serving will even agree, but say they are powerless to do anything about it “because those are the rules and that is the way things are!”

Hopefully such experiences make you more alert to ensuring that your organisation does not operate with a radical, rigid and almost religious reliance on rules. They do prompt you to talk to your people and find out if they ever feel that way, don’t they? You can never expect to provide an exemplary customer experience if you don’t. 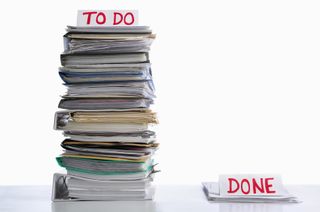 However, rigid reliance on rules has a near cousin that also impacts negatively on your organisational effectiveness, and thus on your service and ultimately your customers’ experience. You could call this “the tyranny of the task.” Let me give you an example.

An organisation that has been impacted by the tough economic times had reached a stage where they were being “compelled” to make redundancies. Implementing these redundancies was one of the last acts of the CEO who would be retiring shortly, but who felt it was necessary to ensure their successor had a completely fresh start, “without any baggage.” An admirable aim!

So the employees were all made aware of the impending redundancies and asked to complete a form that enabled each employee to be measured on a points system to determine who would “face the axe.” However, in the very week that the decisions were to be announced, the Marketing Department created a mass mailing to invite all and sundry (including employees) to attend a black-tie farewell dinner for the retiring CEO. Fair enough, you may say, but let me tell you a little about how this was managed.

Now you would think that the Marketing Department could have prevented this situation by simply advising the Mailing Room in advance. However, that is the least of the issues in this example. You should also know that:

So you have to ask, why the urgency? But the worst of it is that, to add insult to injury, this mailing included all employees. Just imagine how you would feel if you received a letter inviting you to pay 50 pounds to attend the farewell dinner of the person who made you redundant the day before or the very day you were made redundant!

This is what I mean by the tyranny of the task – becoming so fixated with the task that you become obsessive – your head goes down, your bottom goes up and you get on with it without any consideration to what you are doing, why and the possible consequences.

Paradoxically this apparent dedication to one’s work is a result of employee disengagement. And this kind of gross, counter-productive stupidity is why I argue that employee engagement is essential and the only way to engage employees is through employee ownership. That is the closest you will ever get to creating the kind of organisational alignment that will break down the silo mentality and improve productivity, effectiveness and efficiency.