Sociable Business? Do you have a choice?

Do you keep coming across the terms social business or sociable business?

They certainly seem to be more and more frequent. But do you also find them slightly jarring?

After all, business is ultimately about people providing a product or service to other people who want or need what you are offering. It is useful and it is beneficial to both parties. In my book that makes business a social service and thus, by definition, makes all business sociable. 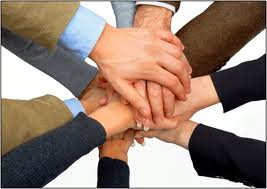 Consequently, the better you deal with the various human interactions of your business, the better your business will perform. It’s hardly rocket science. So, whatever, the “proper” definition of the term sociable business or whatever it conjures up in your mind, you should never allow yourself to be sidetracked from this basic fundamental. It is the key to everything you do in your business and to its ultimate success – and yours.

When you understand this, the question “How sociable is my business?” takes on a whole new meaning and creates a whole new dynamic and sense of purpose. Just ask yourself, and see the difference it could make.

A Different Perspective on Employment

Do you ever stop to think about why you are working?

Or who you are working for?

For most of us work is something we have to do. We have no choice. It is essential for our survival and so is unavoidable and inescapable. 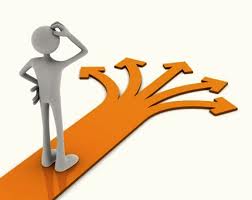 But what about your employer – the person or organisation you work for? There perhaps you have more choice. So, if you have no choice about the need to work, but you do have a choice as to whom you work for, what does your place of work say about you? Or, to put it more directly, who do you really work for?

The fact is that each and every one of us ultimately works for ourselves. Irrespective of the name of the organisation, who you boss is, or who pays your wage, your work is how you spend a large part of your waking life. And it is your life and no-one else’s. So it is part of your self-expression and when you boil it down to the lowest level, there is no getting away from it: you are ultimately working for yourself.

Think about that for a moment. Then ask yourself how this changes your attitude to your work. After all, if you are not enjoying your work or maximising your personal potential, you are effectively wasting your life, aren’t you? And since to the best of our knowledge we only get one, and that one is pretty short, it seems a pity to waste it, doesn’t it?

Now change hats. Think of yourself as the employer. How do you view your people? Do you see them as a “resource” and there to do only what you tell them? Or do you see them as people who, like you, are also trying to make the most of their short lives? If so, what are you doing to help them?

The good news is that, whatever you do, you will create greater work-life integrity for both your people and you. This will inevitably transform performance all round. And that makes it worth thinking about, doesn’t it?

An Essential Element for Employee Engagement

Are you really surprised?

Sometimes it seems that we research things where we should – certainly if we are worth our salt – already know the answers. Perhaps this is necessary to reassure us and give us the confidence that we are on the right road. Certainly the results of the latest global survey by Blessing White, highlighting trust in senior leadership as an important factor in employee engagement appear to fall into this category. After all, would you really expect people to be totally engaged if they felt the senior leaders were a bunch of ... (you fill in the blank!)

And certainly the conclusion that "Trust the boss" implies is that senior management “deliver engagement.” But is that the correct conclusion?

The “disconnect” showed only 36% of engaged employees trusted their line managers, compared with 75% percent of the total sample population. This is very surprising, not just because the percentage that trusted senior management remained almost constant for both groups at around 50%, but because traditionally HR have led you believe that dissatisfaction with one’s immediate manager is the primary cause of:

Yet here you have more engaged than disengaged people who distrust their line manager – and all while the overall trust in senior management shows insignificant difference. So clearly there is something here that warrants your deeper consideration.

The conclusion that trust in senior management is important may be valid, but do you think it warrants the degree of promotion that it’s given? After all, only 30% of people are engaged anyway. And even for those employees “under half trusted their senior leader!”

Makes you think, doesn’t it?

So if it is not the employee’s immediate manager that elicits engagement – and it clearly isn’t – and it isn’t trust in senior management – which may be a factor, but clearly not as significant as the report suggests, then what does? 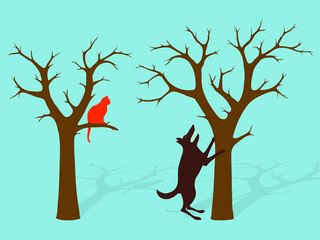 Are you barking up the wrong tree in your endeavours to win “the talent war” or “the hearts and minds” of your employees? What if engagement is intrinsic? Certainly, that is what I have always believed. It is what the name Zealise is intended to convey and what the solutions we promote and champion offer you - the means to inspire your people to fulfil their own potential. Isn’t that the recipe for true engagement?

Is the HR profession doing it again?

Whether or not you believe that bankers’ bonuses caused the near-collapse of the industry and the subsequent economic crisis that just won’t go away, you might still argue that it is all the fault of HR. After all, no matter what your view,the debate about excessive executive remuneration would not be happening if it were not for the now ubiquitous doctrine of performance related pay (PRP) or incentive remuneration (IR.)  And whether they conceived the notion or were simply followers of the cult, HR cannot escape blame.

For the last three or four decades the PRP/IR net has spread ever-wider. Initially designed to link senior management and executive remuneration to the achievement of objectives, PRP/IR gave large bonuses the respectable "coat of contingency" that made them more palatable. This, however, proved to be the thin edge of the wedge. The trickle down phenomenon soon became a cascade and PRP/IR spread through the ranks to the point that it became endemic, even in the public sector.

And who can count the cost of that; not just financially, but in terms of the corrosive effect it has had on the workplace? It is no wonder that employee engagement levels have been declining in conjunction with the rise in PRP/IP, for it comes with a narrower and more intense focus on measurement and performance that stifles the human spirit. And this despite the evidence of people like Harry Harlow, Edward Deci and Richard Ryan and numerous others, that incentives only work for routine mechanical tasks and for more complex problems can actually have a negative effect. In the light of such research it is perhaps no wonder we have an economic crisis.

Of course you can make excuses for HR for this. PRP/IR does seem so logical. But it was letting the genie out of the bottle. Once introduced it became a monster that was too big and too daunting to put back in.

But you have to ask yourself if the profession is not in danger of making another similar, potentially catastrophic mistake with talent management?

Talent management is rapidly becoming one of HR’s key strategic tools. And – just like PRP/IR it sounds wonderfully plausible, proper and praiseworthy. But the term is dangerous. You don’t hire talent – you hire people. You don’t manage talent - you manage people. You don’t grow talent - you develop skills (albeit from a source of talent.) So while it sounds good to talk about “identifying, growing and retaining talent” you are already in danger of losing the plot. Your objective is to help people to find, develop and optimise their talent and so fulfil their potential. 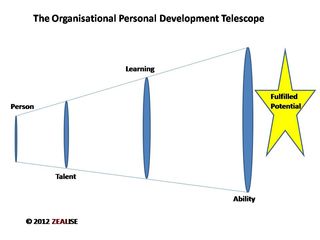 Think of it as a telescope, with a series of lenses. Each lens helps to make the object (objective) nearer. And when individual and organisation share the same objective you both have a greater chance of success. So the more fulfilled people you have in your organisation the more successful your organisation will be. But it all starts with the person.