Change begins with the individual

This week I would like to continue with the subject of last week's blog and the key theme of the Association of Change Management Professionals conference in South Africa, viz. "Change begins with the individual."

If you think about it, that is pretty fundamental and hardly rocket science. After all, over time, people tend to do what is in alignment with their goals and their view of the world. In other words, people do what makes sense to them, or don’t do what doesn't make sense to them.

This being so, it seems self evident that if people are resisting change, it is because:

Either way to effect change you have to convince them to change. That is the only way you will overcome their resistance. However, I remain convinced that, from an organizational point of view the only way to break down that resistance is to create the "line of sight" that comes from the shared values derived from employee ownership. More than just a ploy to create employee engagement, making employees co-owners of the business gives a common interest and a new industrial relations dynamic that breaks down the old management versus worker conflict that has soured industrial relations for over two hundred years. 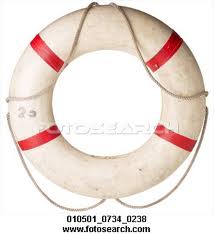 Why don't you consider giving it a chance? If you are struggling to introduce change, it might just be the lifesaver you are desperately looking for.

A New Era Is Dawning

Last week I had the privilege of attending the world's first Association of Change Management Professionals conference at Monte Casino in South Africa. What an experience it was and how appropriate that it should be held in South Africa.

Arguably no country on earth has the same diversity of people, and certainly none can claim to have managed societal change on the scale South Africa has in the past 20 years. If ever you wanted proof that change is possible you need look no further, and for me as a former resident it was particularly encouraging. Developments there have been unprecedented and powerfully reinforced one of the key themes of the conference: "Change begins with the individual."

All change! Understand this and you open up a whole new spectrum of possibilities, whether you are dealing with organisational or national change. It happens one person at a time. Of course all management entails overseeing change, but this new emphasis on people is a wonderful endorsement of the philosophy that has underpinned my career, and particularly my efforts of the last 7 years or more. To hear the Chief Executive of one of the world's largest, and most successful, leisure and hospitality companies commit to achieving an "impossible" goal of 80% employee engagement - and his advisors are apparently telling him that it is not possible - is music to my ears and balm for my soul.

Who knows, if a few more were to make such a commitment, the employee engagement through employee ownership model I have been promoting may yet become the universal standard that I envisage, and 80% employee engagement become the bottom end of the range rather than "the impossible dream" they are currently considered. Certainly, the HR profession needs to be more positive about - and supportive of - such initiatives if they are ever to command the respect at the top table they seek.

How Balanced is a Balanced Scorecard?

Do they give a truly representative picture? What do you think?

If you are not sure perhaps this diagram will give you a clearer idea. 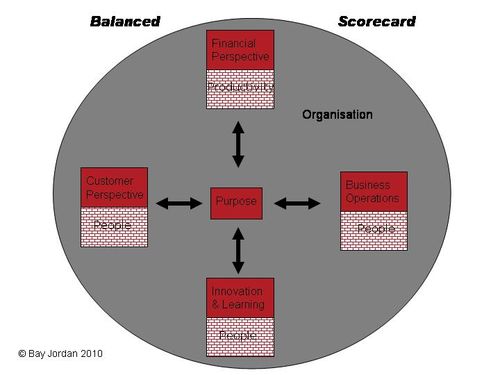 The circular shape depicts the organisation and the rectangle in the middle it's raison d'etre - its purpose. Of course the purpose is what drives the vision and strategy and ultimately the direction in which the organisation is headed. Yet all too often when you start with strategy you forget this. I would say that is one of the major shortcomings of traditional balanced scorecards, wouldn't you? They always seem to have the strategy as the central point.

The surrounding rectangles all depict the conventional measurement categories and there is no change there. However, you will notice that I have divided them into 2 halves with the bottom half showing depicting the foundation for each category. Here is where you will notice the departure from convention because all but the financial are ultimately dependent on people.

Furthermore, if you think about the top one "financial perspective" you will observe that the foundation for that is "productivity." Why? Because ultimately all financial measures focus on productivity. And what is the most common measure of productivity? That's right - it is the net income per employee. So once again it boils down to the effectiveness of your people.

You may recall that before the advent of the Balanced Scorecard businesses relied exclusively on financial measures. So it is appropriate that the financial perspective should appear at the top. You could perhaps say that is the allegorical rear-view mirror and many have said that managing a business from historical figures is like driving a car by looking in the rear-view mirror!

So how much added-value does the balanced scorecard give you? Well, I would say that unless you take this diagram to heart and recognise the value of your people and the contribution they make, you are still in the dark ages. You see, you are still thinking like a manager rather than as a leader.

This diagram shows why employee engagement is the hot issue it is. It also shows why employee ownership is such a powerful force, because it is the only way you can start to align the purpose of your people with that of your organisation. It is only then that you will get the organisational integrity that you need for improved performance, success and sustainability.

When will we ever learn?

"Experience is the best teacher," they say.

Really? In that case, you would think we would have learned our lesson, wouldn't you?

You would think after the collapse of the financial services markets and the economic crisis that it caused the financial services industry would be cautious about its bonus culture. Yet this is not the case. An article in HR Magazine this week reports that city employers are using "bonus buyouts" as a means for luring people from their competitors.

Now, in case you don't know, a bonus buyout "is where an employer offers to buy out that a prospective employee has accumulated under their current employer's bonus scheme but which they do not yet own."

This means that all the efforts to take the short-termism out of incentive remuneration are being invalidated.

In fact it is even worse!

This is going to exacerbate short term thinking for it effectively guarantees bonuses. You can front-end load your performance and then bail out before the chickens come home to roost, knowing that you won't have to pay the price for your decisions.

On top of that it will create a spiral of inevitable salary inflation. For city employees can guarantee their discretionary pay simply by indulging in a game of never-ending musical chairs. And it is not as if they were not already virtually guaranteed by the way remuneration is structured...

Nor is anyone questioning the underlying economic need. You would think that an industry that had messed-up so spectacularly would have seen the job market awash with former employees who had paid the ultimate price and lost their jobs as a result of the recession. Yet, it does not seem that this is the case. The rest of the economy sees massive unemployment but the city still seems to have a skills shortage. How come?

Yes, financial markets may be a specialised arena, but surely there are enough high calibre people in the marketplace who could, very quickly, be brought up to speed and at a fraction of the cost. And at the same time raise the questionable ethical standards.

It would seem that the HR profession is standing by - or worse - even actively promoting another potential disaster. The profession seeks a more strategic role and a place at the table, yet it is absolutely incapable of thinking strategically. So the same motley bunch continues to control international financial markets and they don't appear to even understand basic financial management. Heaven help us all! As Bob Dylan sang, "When will they ever learn?" The problem is 'they' is us! When will we learn?